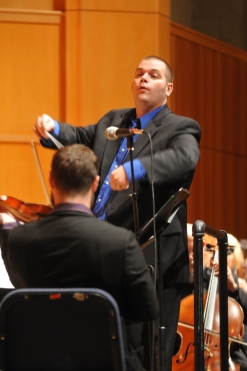 As a conductor, music educator, and arts advocate, Dr. Jeff Specht is dedicated to fostering the love of music, enriching people’s lives through performance, and building musical community.  Equally at home conducting symphonic works and opera, his performances have been hailed by critics as “exhilarating and inspiring!”

In July of 2018, Dr. Specht was appointed Music Director of the Shasta Symphony Orchestra and Director of Orchestras / Band at Shasta College in Redding, CA.  Prior to joining the Shasta community Jeff previously taught at Lewis & Clark College in Portland, OR, and the University of Minnesota Twin Cities.  From 2011-2017, Maestro Specht served as Artistic Director of the Oregon Pro Arte Chamber Orchestra in Portland where he developed the ensemble into a powerful force in the PDX classical music scene. Through his dynamic programming, enriching education outreach, and the creation of the Emerging Artist Solo Competition, the orchestra served as a prime promoter of chamber orchestra music throughout the Pacific Northwest, also drawing international recognition through its John Kenneth Cole Composition Prize which attracts submissions of works from young composers throughout the US and Europe.

Dr. Specht has made guest conducting appearances with the Quad City Symphony Orchestra, the Fort Worth Symphony, the New Symphony Orchestra in Sofia, Bulgaria, the Quad State Music Festival, and the Mississippi Valley Orchestra.  He also makes regular appearances as guest conductor of the Central Texas Opera Festival.  In 2011, Dr. Specht completed his dissertation titled, A Guide for the Study of Orchestral Bowing and String Technique for Conductors which is a comprehensive resource on standard orchestral bowing practices and their application in music performance.

Jeff holds a Doctor of Musical Arts degree in Orchestral Conducting from the University of Minnesota-Twin Cities, a dual emphasis Master of Music degree in Orchestral and Wind Conducting from The Meadows School of the Arts at Southern Methodist University in Dallas, TX, and a Bachelor of Music Theory degree from the University of Wisconsin-Eau Claire.  His past teachers and mentors include: Mark Russell Smith, Craig Kirchhoff , Paul Phillips, Carl St. Clair, Miguel Harth-Bedoya, Nobu Yasuda, Henry Charles Smith, Jerry Young, and Osmo Vänskä.